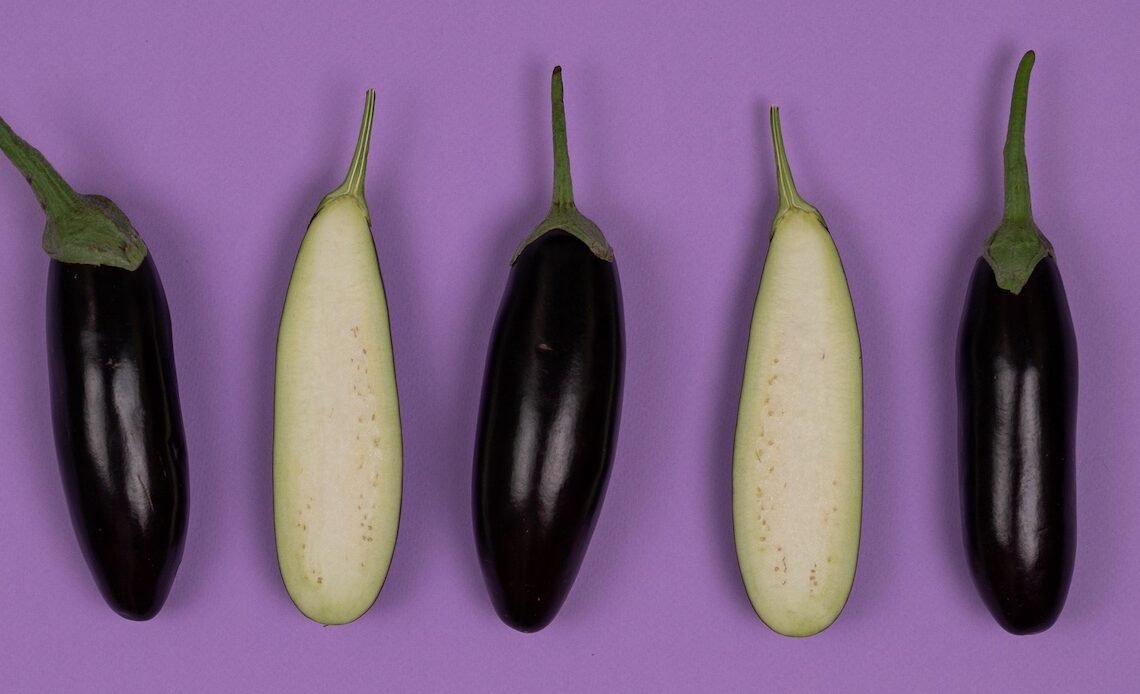 Greeks love eggplant.  The most famous dish of course, Mousaka, is considered by many the National dish Greece. Simple fried slices of eggplant in Extra Virgin Olive Oil sprinkled with parmesan cheese is simple and delicious.  Let’s examine why the Greeks love eggplant.

Eggplant technically is a fruit, a species of nightshade originating in South and East Asia. The fruit was introduced to the Mediterranean region by the Arabs. It is featured in a lot of Asian, Middle Eastern, Greek, and Italian dishes. Most Americans and Europeans are familiar with eggplant parmesan, a dish that involves dipping slices of the eggplant in an egg wash, breading it, and then baking it with pasta sauce and cheese.

Raw eggplant has a bitter taste but is capable of absorbing a lot of cooking fats and sauces, making for very rich dishes. Many chefs will cut the eggplant and salt it, leaving it for about ½ hour to release this bitter taste.  However, I have found that today’s eggplant is not as bitter as it once was.  Because the fruit tends to be bulky, it is used as a meat substitute in many vegetarian and vegan dishes.

Because of its association with nightshade, eggplant was at one time thought to be poisonous, perhaps that is why many people salted it first, and then rinsed it.   The leaves and the flowers can cause harm if eaten in enough quantities. In folklore, the fruit was thought to cause insanity.

In Italy, fried eggplant is served as part of a meal. You dip the slices in an egg wash and breadcrumbs. Then you fry the slices in olive oil for two to three minutes on each side. The cooked eggplant is sprinkled with Parmesan cheese or served with a marinara sauce for dipping. Variations of this dish can be found in Middle Eastern cuisine, as well.  You can make this keto by omitting the egg wash and breadcrumbs and just frying the eggplant, then baking it in a tomato sauce topped with mozzarella and parmesan cheese.

Eggplant can also be grilled. Slice the eggplant and brush both sides with olive oil, seasoning with garlic and oregano. Put the slices on the grill for ten minutes, turning occasionally. This method works best on a charcoal grill, as it adds a nice, smoky flavor to the resulting dish. The grilled version of the fruit has the texture of a tender steak, but with its own unique taste.

So why eat eggplant? First, the best eggplant come in in the summer months.  Eggplant is in season July through October. Adding eggplant to your diet will provide you with many health benefits including the five listed below.

Eggplant is in season during summer.

Eating foods that are in season is good for your health and your wallet. Market-inspired foods are plentiful and therefore usually less expensive. Many of them will also travel less and retain their nutrients. If you buy locally grown produce, you can rest assured that the eggplant you’re eating was picked shortly before you bought it.

Eggplant not only contains no fat, but is low in calories. Eggplant is a waist friendly food that can be baked, boiled in stews, or fried. Just remember that if you do fry eggplant, the calorie and fat content will go up slightly due to the oil, which is ok on Keto.

Eggplant is good for the brain.

If you’re interested in protecting your brain, you’ll want to add eggplant to your shopping list. Eggplant contains antioxidants that help to protect brain cell membranes. It also contains phyto nutrients that will nourish the brain. But don’t peel the eggplant, because the skin is where those good things are found.  I remember my “good” cholesterol was low and my doctor told me to start eating foods that were purple, like Greek Kalamata olives and eggplant; now I see the connection.

Iron carries oxygen from the lungs to the rest of the body, and is also important to the maintenance of hair, skin, nails, and cells. A deficiency in iron can lead to anemia, poor memory, fatigue, and hair loss.

Eggplant is a source of copper.

Copper is a mineral important to proper growth, pigmentation of the hair and eyes, and energy. It plays a role in balancing the thyroid gland, red blood cell production, and regulating heart rhythm. Copper also aids in the absorption of iron.

It’s hard to ignore the fact that eggplant boasts many nutritional benefits. Use the summer to experiment with adding eggplant to your meals.