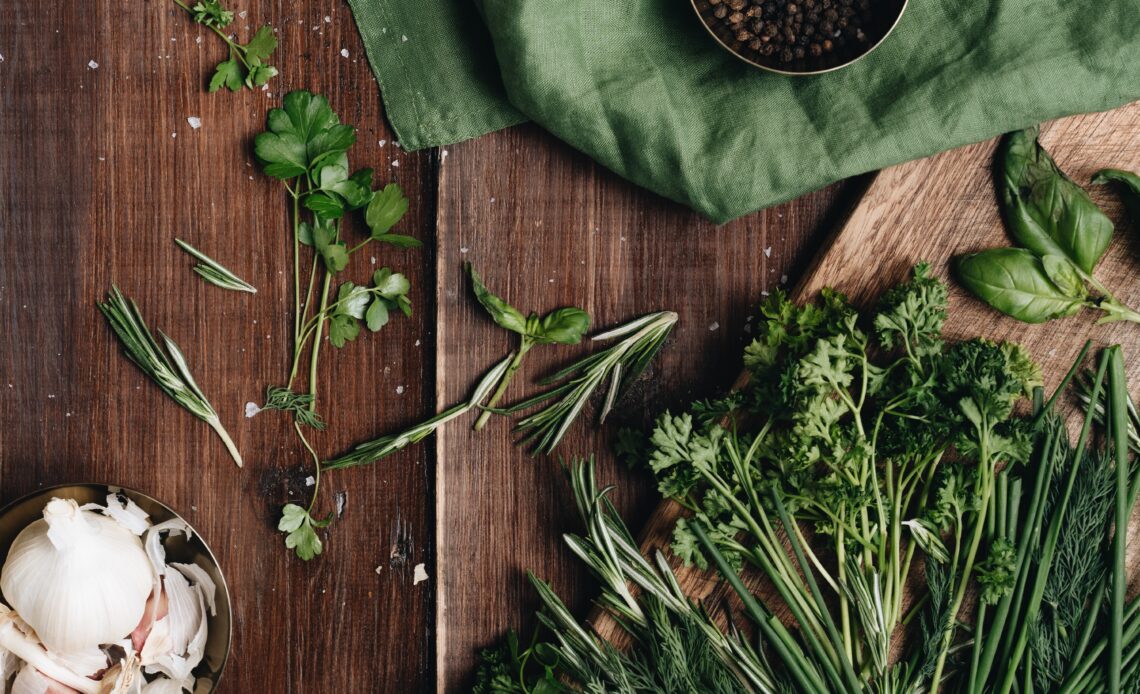 I think what makes Mediterranean herbs unique, especially in Greece, is the availability of the wild herbs found on the hills and sides of mountains.  For example, sage, rosemary, and bay leaves grow abundantly throughout the hill sides of my town of Molyvos on the island of Lesvos.  We easily find Chervil when we are foraging for wild greens like dandelions and wild asparagus.  Fennel also grows abundantly throughout our countryside.  People in our town do not buy mint, because almost every household has a pot or two growing in their yard; same with basil although Greeks do not cook with basil so much.  I am not including basil in my top 10 essential herbs; however, I use fresh basil when I combine it with fresh mozzarella or burrata with tomatoes drizzled with olive oil and balsamic vinegar.  I also use it in my Italian inspired sauces.  Now, let’s look at my 10 essential herbs for Greek cooking.

This is my “go-to” herb in the Greek cuisine.  I made sure that after I return from my summer trip to Greece, that I have enough fresh-picked (air dried) oregano to last me until next summer’s visit to Greece.  We normally pick the oregano in June when it flowers.  Many cultures only use the leaves, however, on our island in Greece, we use the flowering bud with some leaves.  We bunch it and tie it up, then hang it upside down to drive.  We then rub it in our hands and store it.  More recently, I have been bringing the entire buds home and have been rubbing them and grinding them on a monthly basis.  Seems like it stays fresh longer.  You can find Greek oregano on Amazon or at your local Mediterranean food shops.  Use on salads, vegetables, red meat and fish.

Marjoram can be used fresh or dried and is commonly used in salad dressings, marinades and sauces.  I believe it is a sub-species of oregano so it can go great with lamb and even chicken.  Like other herbs, Marjoram has antioxidants, anti-inflammatory, and antimicrobial properties.  Also tastes great in stews and even dishes with different types of squashes.  Use in sauces, marinates, salad dressings, and various meats.

When I think of ancient Greece I think of Rosemary for some reason.  There are islands in Greece that grill fish and then make a vinegar-based sauce with onions, garlic and fresh rosemary that is to die for…truly a unique flavor.  You can also chop the fresh Rosemarry and toss it with your favorite vegetables before roasting in the oven.  It also can be used on roasted vegetables, chicken and lamb.

The mother of herbs for all Greek cooking.  Literally you can put it on anything…anything!  From stews to salads, this versatile Greek herb is great on everything.

Interestingly, many parts of Greece do not use dill in their cooking.  However, coming from Lesvos island that was sitting next to Asia Minor, our cooking includes a lot of mint.  From salads, to soups, to stews, and pies, we incorporate dill in many of our dishes.  Also goes great with lamb and fish.  Use in vegetables, and salads.

In the states, you can purchase the whole fennel bulb and use the fronds that come with it; if I don’t see the fronds on the bulb, I usually will not buy it.  I love the fennel fronds in my herb and green leaf pies and even in soups, vegetables, and salads.

This also grows wild on our island so we forage and dry it the same we dry oregano.  We will typically use this on chicken and lamb and sometimes fish.  We use it mostly dried, although today’s chef’s also use the fresh version as well. Use on chicken and lamb.

Growing up with my grand parents, I usually associated sage with tea and rusks (Dried bread/toast).   Many cold nights my grandmother would boil the dried sage leaves and then dip rusks in the hot tea which softened it and made it even more delicious.  Today, I still use it as tea, but without the rusks.  I also use it in roasted chicken and lamb dishes.

Like rosemary, for some reason Bay leaves remind me of ancient Greece.  Although many people think bay leaves are useless, they are not.  If oregano and basil screams, bay leaves whispers a sweet and peppery and minty flavor into your sauces and stews.  Haters gonna gate I guess.  I will put bay leaves in the water when I boil crabs and shrimp in addition to the soups and stews.  For sure I’ll put it when I braise beef, or make the famous dish “Stifado” which was originally done with rabbit, however, I adapted the recipe and make it with beef or lamb.  Infusing bay leaves into your cooking really adds a unique flavor that Greeks have been using for the millennia.